The walls and carpet were affected in this bedroom, causing them to be removed.

Storms recently ripped through the Chicago suburbs, causing thousands of dollars in damages to homes throughout the area. As the rain continued to fall, the sump pumps in these homes failed to keep up. The home pictured here suffered that fate, as their sump pump failed and caused water to enter into their basement. The water would end up affecting the carpet as well as the walls. Thankfully most of the customers content was able to be salvaged except for a few cardboard boxes. SERVPRO was able to asses the damages and determine what the next steps needed to be. The technicians on site determined that most of the walls needed to be cut due to wet insulation as well as determining that the carpet and pad was not salvageable. When all the demolition was completed, they set drying equipment consisting of air movers and dehumidifiers to start the drying process. All in all the process was completed after 4 days. The customer was very pleased with our work and decided to use us for the reconstruction as well. It will be a pleasure too see this project through from start to finish. 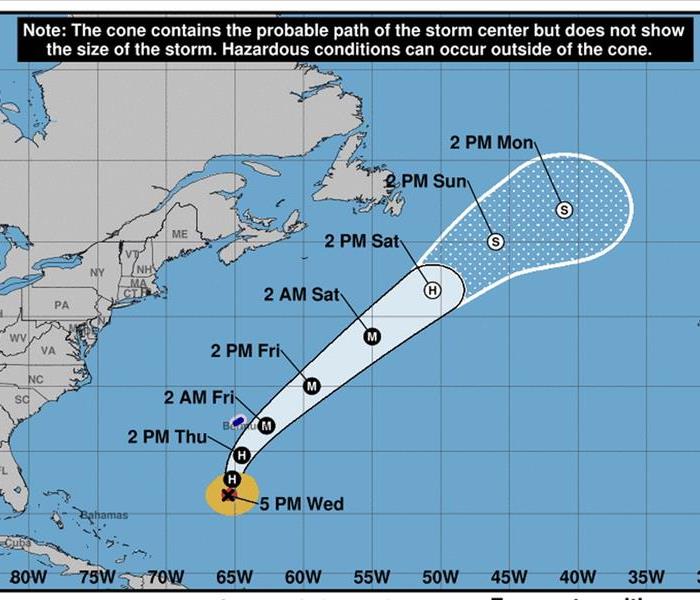 Earl, the second hurricane of the 2022 Atlantic Hurricane Season, has been forecasted to become the first major hurricane of the season. A major hurricane is categorized as a hurricane that has winds of 111 mph or greater. The hurricane is not a threat to the United States, as it is moving eastward in the Atlantic toward Bermuda. The good news is that experts expect the hurricane to miss Bermuda to the southeast, only causing some gusty winds and some rain and avoiding the really dangerous and damaging stuff. It is expected to reach its peak strength sometime this afternoon as it veers off to the northeast. Although the hurricane will not directly affect the United States, the US could potentially see some swells which will cause some very dangerous rip currents. There are currently two hurricanes active in the Atlantic, along with Earl there is Danielle. Danielle isn't as strong as Earl, failing to reach the "major" category. This is the first time since 2020 that two hurricanes have been active at one time in the Atlantic. 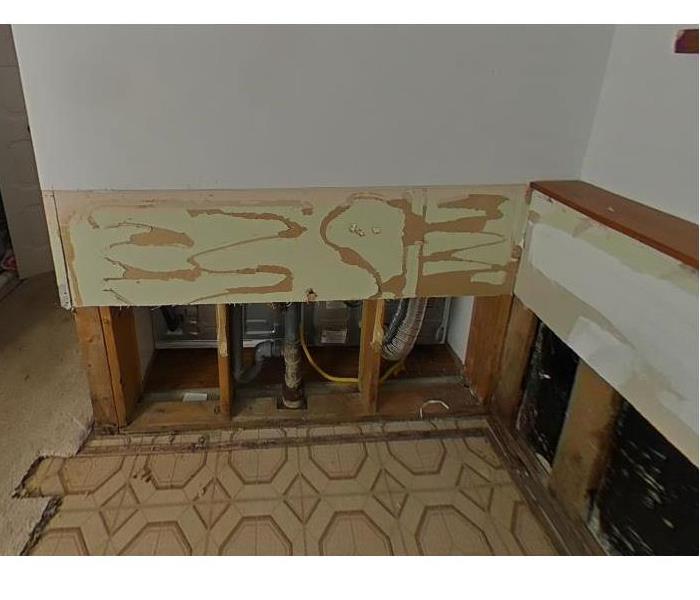 This image highlights what was removed from the room.

A leaking washing machine caused water damage in a nearby room as it saturated the carpet and the drywall in the room. Luckily the homeowner caught it fairly quickly so the damage was limited to just one corner of the room. The other good thing they did was call SERVPRO right away. This is important because the longer they wait, they more potential problems come into play and the damage can become greater. When SERVPRO arrived, they assessed the damage and determined the best course of action. The affected carpet and pad was removed, and as you can see from the picture it wasn't a very large area but it is still imperative that it be removed. The next thing they did was remove any affected drywall. Usually interior walls would not be removed but in this case it was so saturated that SERVPRO techs used their professional opinion to determine it should be removed. The other wall was an exterior wall that contained insulation so that had to be removed no question. Then the drying equipment was placed and it was left to do its thing. The job was dried out and completed in just a matter of three days, leaving the homeowner thrilled. 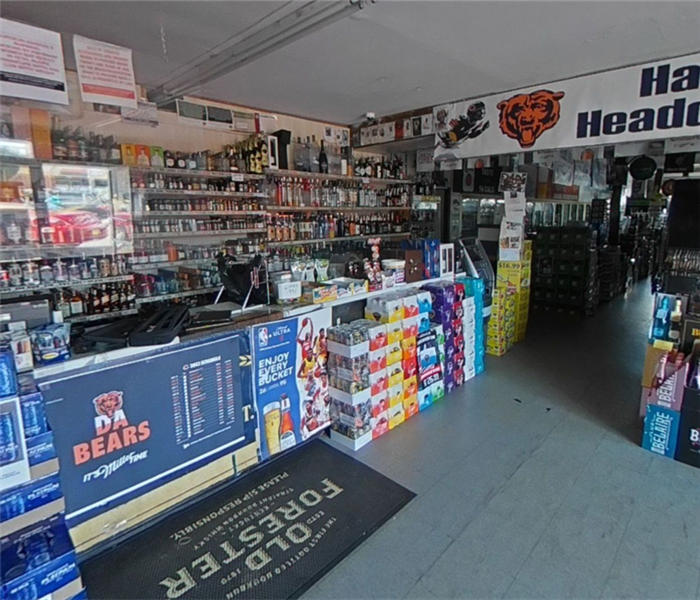 The liquor store was up and running again in less than a week.

This liquor store recently had a fire breakout in the apartment unit located directly above it. Although the store did not suffer any direct structural damage from the fire, the fire left a lot of smoke and soot damage throughout the store. The store owner did the smart thing and called in the professionals at SERVPRO. After inspecting the store to determine the severity of the smoke damage, SERVPRO developed a plan of action and got to work. An important aspect of this job was that they had to take inventory of everything in the store so it could be claimed. This was an extremely detailed process because any errors or mistakes could wind up costing the customer tons of money. Once everything was accounted for, SERVPRO got to work on the cleaning. The cleaning consisted of ceilings, walls, floors, shelving, and just about anything else you could imagine in the store. All in all, the process took about five days and the customer was extremely happy with how everything turned out. 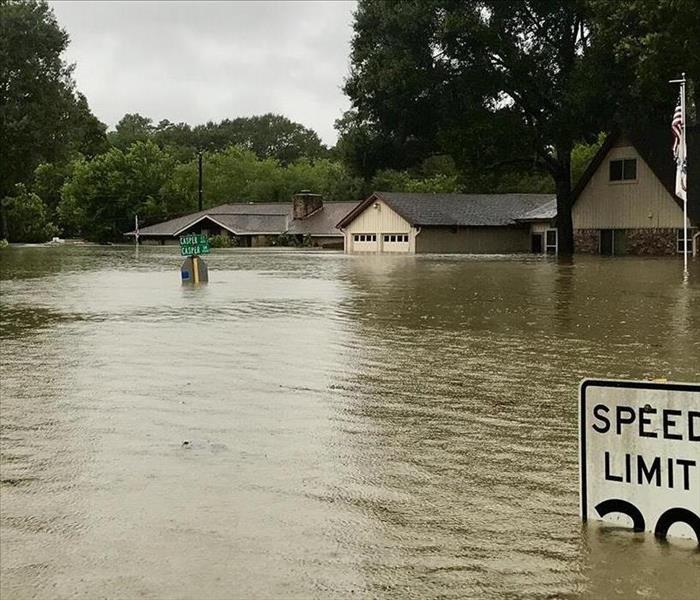 It is important to stay out of the water if at all possible to avoid any unseen hazards.

September is National Preparedness Month. It is a time used to raise awareness about the importance of being prepared for any type of disaster that could strike at a moments notice. According to the government website Ready.gov, there are over 25 different possible disasters. Some of them include, earthquakes, floods, hurricanes, wild fires and winter storms. Although earthquakes, hurricanes and wild fires are out of the norm in Illinois, the other two, floods and winters storms, are something we know very well. SERVPRO has seen their fair share of both and we never shy away from the challenge. When it comes to these disasters, is it important to have a plan in place before hand. This will allow you to navigate the situation more clearly and not in a panic. Having an emergency kit put together is important as well. The kit should contain the necessities, having it put together before hand allows you to grab it and go in a much more efficient time. Ideally, the kit should contain enough supplies to last you at least one week in the event you are stuck in your home.

Flooding On The Las Vegas Strip 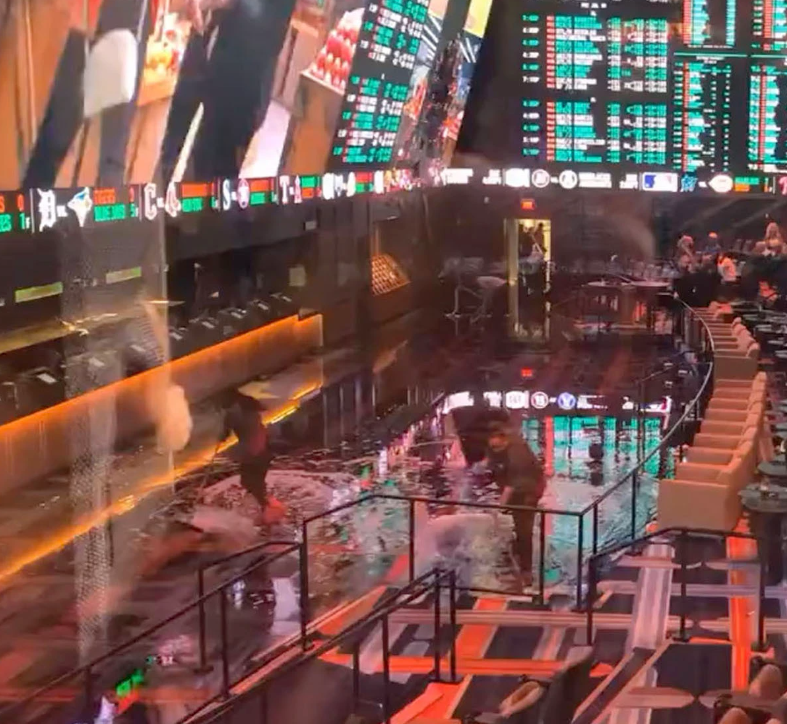 Water poured in onto the casino floors.

For the second time in a little over two weeks, the Las Vegas Strip flooded, leaving rain pouring into multiple casinos through the doors and through the ceiling. Videos show the water raining down onto the carpet and card tables. In this most recent wave of flooding, the two casinos hit the hardest were Planet Hollywood and Caesars Palace. Planet Hollywood suffered a similar fate in the last flood occurrence, with rain coming in through the roof in that instance as well. Las Vegas is currently in its "monsoon season," with this monsoon season being called the most restless season in a decade by experts. According to the National Weather Service, Las Vegas has seen 1.28 inches of rainfall this year in 2022. This is the first time Las Vegas has had more than an inch of rainfall since 2014. The heavy rainfall wound up leaving over 12,000 people without electricity. 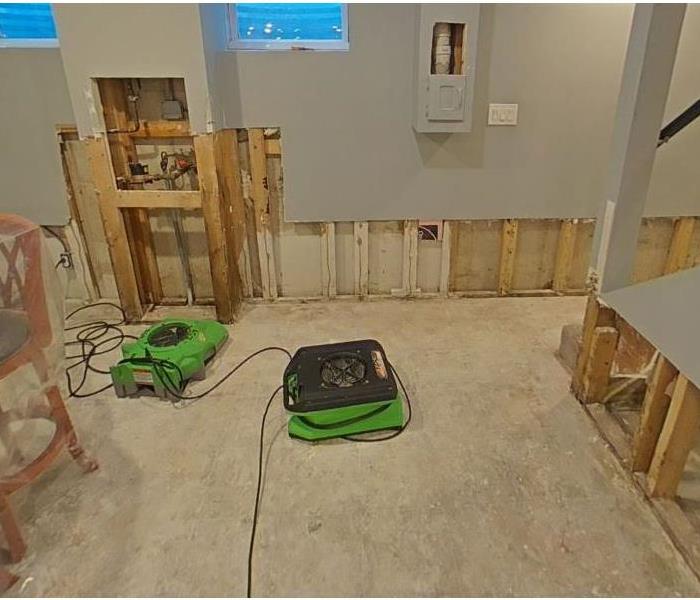 The affected materials were removed from the basement in order to properly dry it.

A leaking valve in the water closet of this finished basement caused significant damage throughout. Based on the amount of water that was found down there, it is safe to assume that the valve had been leaking for some time. Once the leak was fixed by the plumber, it was time for SERVPRO to get in there and get to work. When it was all said and done, the laminate flooring had to be removed in order to dry the concrete and the drywall had to be cut in order to remove the wet insulation. As you can see in the image, the walls were flood cut at two feet to expose and properly dry the wet studs. Drying equipment, consisting of air movers and dehumidifiers, was placed and SERVPRO was able to get the basement dried out in just three days. The customer was extremely impressed with the efficiency and professionalism that SERVPRO displayed. 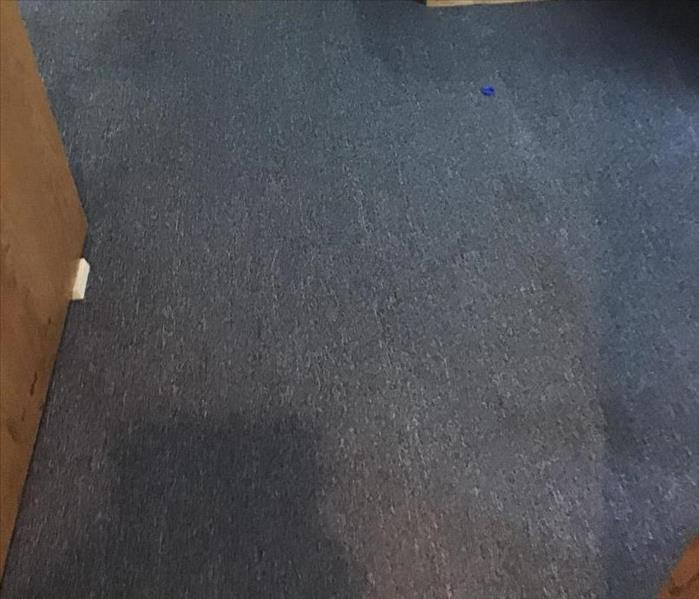 The water flowed out into the carpeted areas

FranCenter is a children's tutoring service that recently suffered a loss due to a sink overflow. However, one seemingly positive aspect of the situation was that it happened on a Friday afternoon while there were still people in the building. If it would have happened over the weekend things could have gotten much worse for them. SERVPRO responded right away and was able to get in there and begin cleaning things up. After extracting the water, they turned their attention to any affected materials that needed to be removed. It is essential to check around and make sure you are not leaving any affected materials behind as this can lead to a number of issues down the road for the business. To do this, SERVPRO uses a moisture meter which helps determine what is wet in the not so obvious areas. FranCenter really wanted to be up and operational by the following Monday and SERVPRO delivered by taking care of the mitigation and getting it dried out in no time. SERVPRO handled the job with professionalism and efficiency leaving the customer beyond happy. 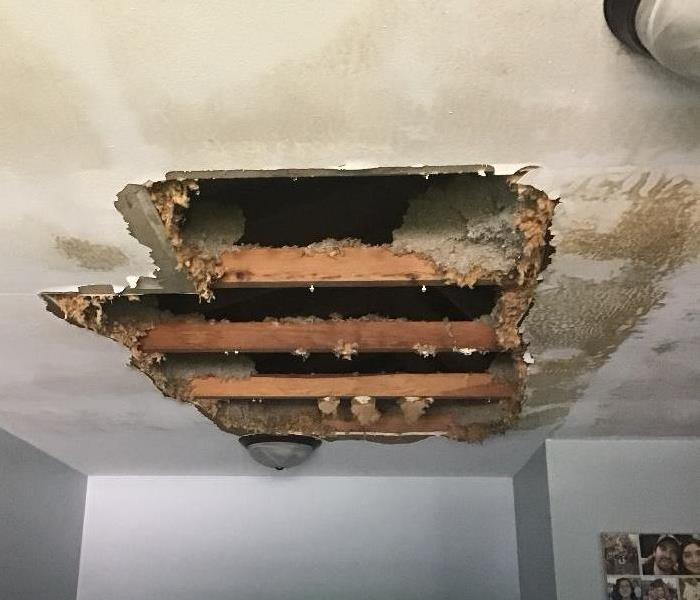 The large amounts of water entering the home caused the ceiling to collapse.

A significant rain storm exposed some literal holes in this homeowners roof. The water was able to penetrate the roof, getting into the attic and ultimately reaching the drywall that made up the ceiling. The ceiling took so much water that eventually it was too much to handle and it collapsed into the living room. As you can see from the staining on the ceiling in the photo, the water damage was much more than just the area that collapsed. SERVPRO ended up removing the entire ceiling in the living room as well as the blown in insulation. There was additional damage to one of the exterior walls, that would end up being removed as well as the insulation. However, this was no match for SERVPRO as they were able to get all of the demolition done in one day and then set the necessary drying equipment. In just a matter of a few days SERVPRO had them dried out and ready for reconstruction. 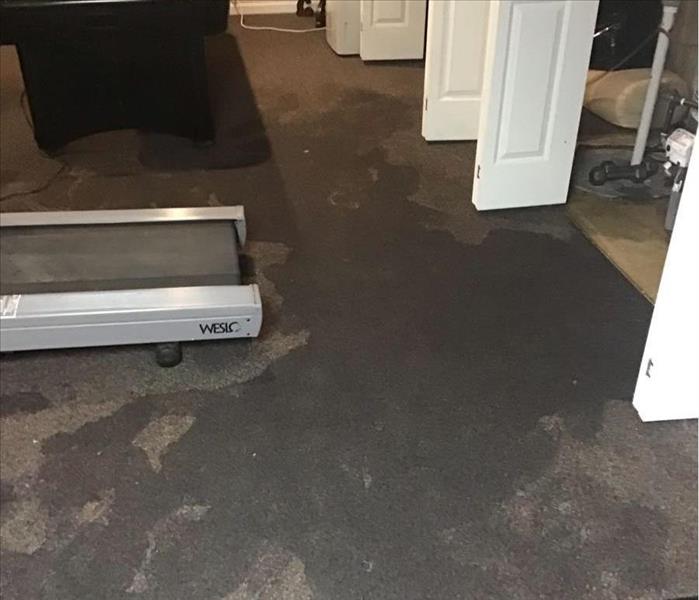 The leaking AC unit caused water damage to the nearby carpet.

Last Friday afternoon SERVPRO received a call from a homeowner who had discovered soaked carpet in her basement. Upon further investigation she determined it was coming from the air conditioning unit. After she had a HVAC company out to take care of the leak, it was SERVPRO's turn to get in there and take care of business. They began by moving all of the content that was in the way so they could better access the affected areas. This was clean water so they carpet was saved, however the padding underneath needed to be removed because that can not be dried. Once the padding was removed, any excess water that might have been on the concrete was mopped up. SERVPRO ended up placing 10 air movers and 1 dehumidifier. The carpet and concrete were dried up in a matter of days. The customer stated she could not be more pleased with the efficiency and professionalism that SERVPRO displayed.